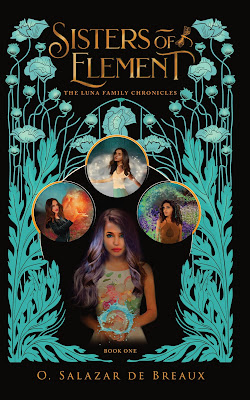 Sisters of Element is the first book in a series about the Luna sisters, four Mexican American young women living in present day Percival Falls, Washington. Lina, Val, Zo, and Rory Luna have special abilities based on the elements: water, fire, air, and earth. Having lost their parents at an early age, the sisters have an unbreakable bond. When faced with a dark force that threatens their very existence, they don’t hesitate to fiercely protect each other — even if it means the ultimate sacrifice.
Lina has it all — her soulmate Gabriel, her dream job, and a close-knit relationship with her three younger sisters. But meeting her sister Val’s new boyfriend triggers a series of nightmares leaving Lina frightened that something terrible is about to happen to her sister. Little does she know, she and her family are in even more danger than they could have imagined.
Readers will go on a magical and mysterious journey with the Luna sisters. The characters will share their inner strength, their sacrifice, their resilience, and the power of sisterhood. At its heart, Sisters of Element is a story about unconditional love and how with it, you can overcome even the greatest obstacles.
My Review

Sisters of the Element is a book about four sisters with extraordinary gifts, all revolving around fire, water, earth, and air. They battle with childhood trauma that transforms them into independent women who conquer their gifts. The book follows eldest, Lina, who talks about her experience being the eldest and stepping up for her younger sisters during the obstacles they faced growing up.

I thought Lina was a brilliant lead and helped balance the strong personalities of her sisters. The sisters Val, Lina, Zo, and Rory, have distinct aesthetics and character traits. I wish I had more time to get to know each individual better in the book. I especially had a soft spot for Rory, who I thought was just the cutest, and I loved how the author described her connection with her gift, which is earth. I can see how each sister can be a bit stereotypical when there are other young adult books that do follow the same narrative of sisters having gifts that deal with the four elements.

Sisters of the Element is incredibly detailed. I favored the thoughtful and heartwarming background about Mama Joyce, who was an actual hoot.
A critique I would say to the author is that I would have left out the prologue. As a reader, I feel like it spoils the experience of getting to know or favor the sisters when I get a glimpse of what is to come. The book would not be affected by the removal of it, and I think it would bring a bigger plot twist to the story. Overall, Sisters of the Element is a young adult book I believe many will enjoy. I am excited to see the future for these women. 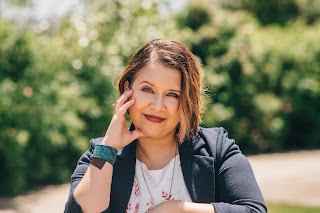 O. Salazar de Breaux grew up in Olympia, Washington with five younger sisters. An entrepreneur and community leader with a long career in public service, Salazar de Breaux is also an incurable creative who’s inspired by her Mexican- American heritage. Her work incorporates her love of family, food, music, and culture.

She stayed in Olympia to study, earning a B.A. in English from The Evergreen State College, and still lives there with her husband – her sweetheart of more than 20 years – and their two sons, whom she considers her greatest achievements.
Sisters of Element is her debut novel.

Email ThisBlogThis!Share to TwitterShare to FacebookShare to Pinterest
Labels: book review, fantasy, ya