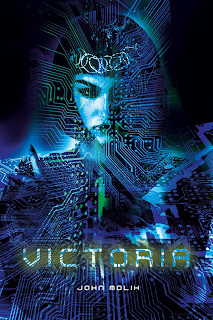 Initially based on co-ops, barter and trade, and equal access for all, a model that rose out of the ashes of the authoritarian governments of the past, humanity, bored and striving for more, eventually steers the planet to a balanced authoritarian model run by Victoria, a genetically engineered Master Server, implanted with artificial intelligence.

When the Animal Rights Act is introduced, the backward-looking religionists and many others think that Victoria has finally gone too far. Artificial love is the glue that keeps the heavily networked society together, but a radicalized religious cult, the MHs, who yearn for a natural connection to their God, reject technology and the electronic beasts who govern. Protected by the blood of their human messiah, they launch a terrorist attack to take down the Perfect Society and replace it with their own.

A top scientist, Claressa, who is loyal to Victoria, and her boyfriend, Pierre Lewalski, are summoned to UFC Capital City to thwart the attack.

Will they be successful? Should they be?

John grew up in Rancho Palos Verdes, California, graduated from UC Davis with a bachelor's degree in economics, and has worked in numerous corporate finance and project management positions in the consumer electronics and IT industries. In 1990, he took an extended backpacking trip of the South Pacific before attending graduate school. He met his future wife in New Zealand, and they were married in 1991. They settled in Laguna Niguel, California. In 2003, John and his family (now with two kids in tow) relocated to Christchurch, New Zealand.

John's passion for writing began when he was a student at UC Davis and worked as a feature writer for the California Aggie newspaper. Having been nominated for a Hearst Journalism Award (1986) for a feature on genetic engineering, John later found the inspiration to write again. In 2013, he began outlining his first thriller, The Fiduciary Delusion, which became the first novel in the Horsemen trilogy. John loves to read techno-thrillers, science fiction, murder mysteries and action and suspense novels. Some of his favorite authors include: Philip K. Dick, Kurt Vonnegut, Lawrence Sanders, Isaac Asimov, Michael Faber and Clive Cussler. 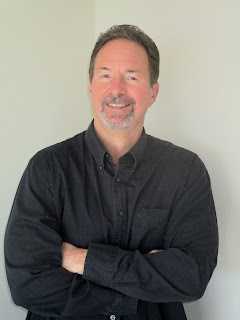 John's interests also include science, existential philosophy, health, and both Western and Eastern holistic medicine. John also plays guitar, piano, sings, and writes music. In addition, a self-confessed “gym rat,” John can be regularly found lifting weights, trudging up hills, sea kayaking, and getting out and about enjoying the beautiful wild outdoors.

“Careful! If you don’t get this part right, you will blow us all to hell!”
Boniface Rotner faltered, shook his head, and aggressively ran his hands through his shoulder-length black hair.
Cornell Elam, a bald 54-year-old technician from the sect, leaned against the stainless steel railing which encircled the metal alloy chamber. Peering down, he glimpsed the top of Boniface’s mat of black hair. Cornell wiped sweat from his forehead with the back of his hand. He pleaded. “Come on! You can do this!”
Boniface Rotner gazed up through the metal tunnel and bit his lip. “Of course I can, Mr. Elam.”
Boniface, at only 15 years old, was far ahead of anyone in their sect in intelligence, creativity, and focus. Earlier, it was decided by sect leaders that he was the only one that could accomplish this critical mission. Not only was Boniface the only one who understood the technical complexity of this 398-year-old technology, he also had very small hands due to his age, which was a crucial job requirement for this particular task.
Having recently resurrected the bank of Moray generators using his keen intellect, time was of the essence.
Boniface grasped the magneto coil wand and carefully inserted it into the capacitance resonator of the high-voltage transformer. Mr. Elam is right. This goes wrong and this entire community will be enveloped in a ball of super-heated plasma.
Cornell’s breathing quickened and his palms were clammy. Fidgeting, he mindlessly looked right then left, and replied, “Alright, then! But, you got to hurry, lad! You got to hurry!” Cornell nervously glanced over his shoulder as if the empty ten-by-ten-foot, fully contained and impenetrable control room was suddenly being breached by a pack of rabid wolverines.
Sweat was pouring down the nape of Boniface’s neck, but he paid little attention to it. Busy concentrating on the task at hand, he knew that the magneto wand must not touch the quantum harmonic oscillator. The Moray generators were at full bore, producing over 5,000 kilowatts of raw electrical power, and were just one step away from being connected to the Tesla scalar interferometer which, when ignited, would produce a thin, impenetrable shell of electromagnetic energy hovering over the sect’s temple and surrounding area. No weapon, or even gamma radiation from an electromagnetic pulse, would be able to touch those living under it. But, if Boniface screwed this up and touched the oscillator, it was lights out for every living thing in a ten-mile radius.
Suddenly, the dead quiet of the sealed control room was interrupted by a strange, distant whirring sound.
Like a cocker spaniel sensing the scampering of a squirrel, Cornell jerked his head in the direction of the sound. “Shit! Those are fucking incomings!” He pounded the steel railing with both fists. “Hurry!”
Boniface squeezed his eyes tightly to assuage the anxiety and regain focus. Opening them slowly, he made sure his steady hand did not waver. The magneto wand just had to pass by the hidden oscillator and make contact with the bridging terminal.
The sound of the incoming missiles, likely all nuclear-tipped, grew louder and louder as their perilous cargos came closer to their target.
“For fuck’s sake, Rotner! It’s now or never!”
Boniface didn’t like swearing, as it was against their religion. Besides, it was Mr. Elam who had taught him acceptable words from the past to use as substitutes. Yet, he also realized that when your life and the lives of all your community looked like it was nearing their end, man’s evil tongue could sometimes release vulgarities, so he forgave Mr. Elam.
Figuring he had about five seconds, he quickened his pace. Biting his lip, he edged his hand forward through the small gap toward the contact plate.
A thin, shrill voice, like the cry of a dying mouse, emanated from Cornell Elam. He held his head in his hands.
Four inches to go. Boniface precisely guided the wand upward. The sonic roar of the incoming missiles was now vibrating the entire control room. It was now or never.
As soon as Boniface touched the plate, an ear-shattering electronic clang and hum assaulted their ears. The hair on his head stood on end as if he was grabbing the top of a Van de Graaff generator. The banks of LED lights on the control panels illuminated just before the entire room shook violently.
Cornell Elam was thrown from his perch into the steel chamber, landing on top of the 15-year-old.
Boniface’s face was red hot. This was the last thing he felt before his rapid descent into total darkness.